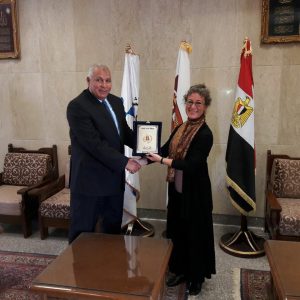 HE General Mohamed Salman al-Zamaloot, Governor of the Wadi al-Gedid, welcomed in the Kharga Oasis Dr Corinna Rossi, Director of the Italian Archaeological Mission to Umm al-Dabadib, and presented her with an award for her work in the Oasis.

The meeting with HE the Governor, Dr Rossi, the former General Manager of the Antiquities of the Kharga Oasis Mr Bahgat Ahmed Ibrahim,  the Inspector Mohamed Ibrahim and Mr Ahmed Moussa, CEO of Pan Arab Tours, focussed on the importance of the archaeological work to be carried out in the Kharga Oasis and on the practical organisation of the forthcoming activities, with special attention to the security issues that affected the archaeological work in the area in the last two years. 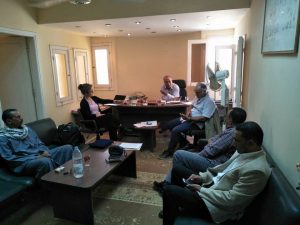 A long meeting took then place at the Kharga Inspectorate with the Chief Inspector Magdy Hussein and the surveillance team, including the Chief Driver Essam Harby Salah and the Ghaffir Ahmed Farraj.